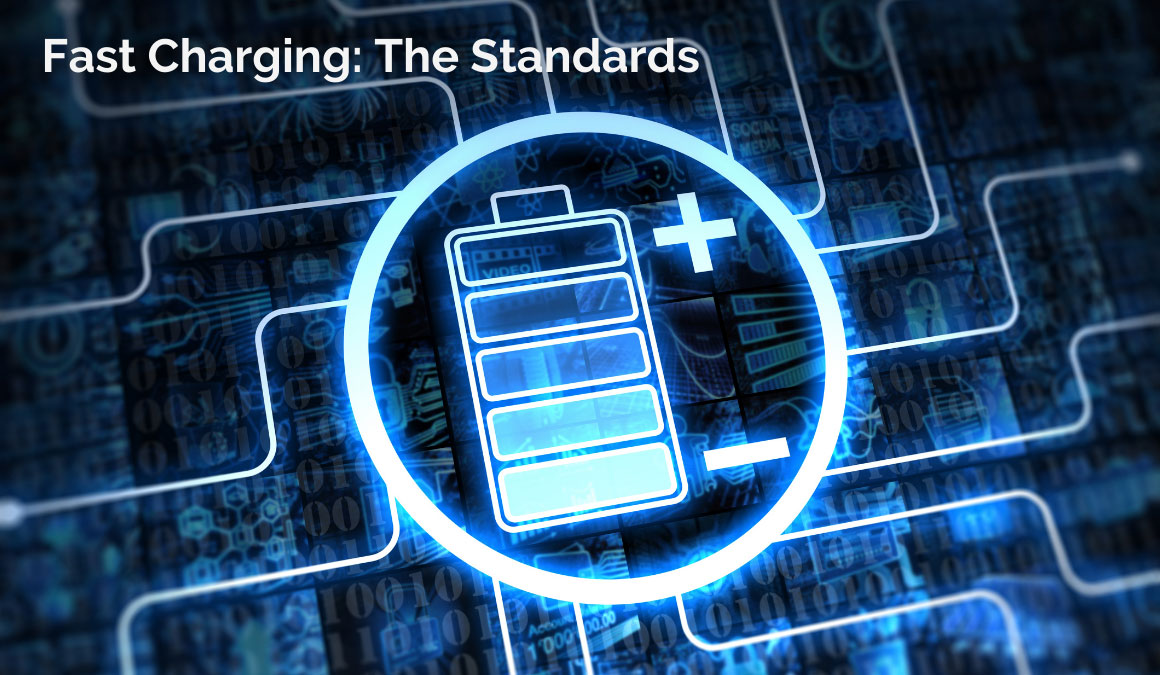 Fast charging is all the buzz lately. And every smartphone brand wants you to buy their own fast charger with their own special cord. Rather frequently, you do need that, or else the magic will never be seen.

So, today we’re looking at the major fast charging standards

What is Fast Charging

In plain words, fast charging is the tech that allows you to charge your device, mainly the smartphone, in much less time than normal charging would.

The trick is that when the battery level is low, you can pump more power into it in a unit of time. Any charging utilizes this, but fast charging is the method that makes the most out of it.

The in-depth dive into the technology of charging a battery is a topic for a separate post, but let’s have a quick look at the basics here:

The charging of a Li-ion battery doesn’t happen linearly. There are three phases involved in the process.

The first one is when the battery is pretty low, that’s the increasing voltage phase. In this phase, the battery goes from the lowest voltage to the peak and can draw the highest current all the time. This is the phase fast charging utilizes the most.

The second phase is when charged 50-60%, the battery starts to draw stable voltage, which decreases the charging speed.

The third phase is when the battery is fully charged, and the power either slowly trickles in or periodically charges a low “topping” amount as the phone consumes battery.

Fast charging pumps as much current as possible into the battery during that first phase, making it quick. This is considered unhealthy for the battery, but that is not a massive deal in smartphones, as the technologies develop too fast, and most of us tend to upgrade our phones every year.

The one issue I have with fast charging is the number of standards. Here’s the list, although there’s a chance it is not exhaustive:

They’re all a little different, and each deserves a word or two.

So, let’s have a look at the major standards, not bound to a single brand.

USB PD, or USB Power Delivery, is the universal standard that any manufacturer can use. It provides up to 100W power, so you can charge most of your devices through it. It allows energy to flow in both directions, which makes it more versatile.

USB PD is what Apple and Google use on their devices. It is also found on most common portable chargers.

This standard by the Qualcomm chipmaker is the most widely used in consumer electronics. It has 5 versions that are backward compatible and built-in protection against overheating and short circuits.

The latest version, Qualcomm Quick Charge 5.0, is capable of charging at over 100W. The still most frequently seen Quick Charge 3.0 works at up to 18W. However, if you want compatibility with USB PD, you need Quick Charge 4.0+ or higher.

MediaTek’s standard is focused on mid-range devices and smartphones. The battery here is charged without the built-in controller. This means that temperature and operation mode is controlled by the power supply.

The system implements over 20 safety mechanisms, preventing short circuits and such. The latest MediaTek Pump Express 4.0 provides up to 30W power. It is compatible with USB PD 3.0.

Currently, the nearest to being universal is the Qualcomm QC standard. However, as seen from the list below, many brands have their own proprietary standards. As the chargers are getting tossed with every phone upgrade, an enormous amount of e-waste is generated.

With new EU regulations and more conscious consumer behavior, the universal charging standard is a matter of time and not a lot of it. As things go now, that standard might be something in the line of QC and USB PD.

Having a universal charging standard is crucial to secure the multifunctionality and mutual compatibility of our devices. And having that is key to further development of customer experience and software solutions.

So, fast charging is not just a thing; today, it’s the new normal. And to be honest, seeing your smartphone filling up in just an hour is rather convenient and eases the low-battery anxiety too.

How it stands in regards to other charging methods? it seems to be the optimal option at the moment, although not without its drawbacks. But who's seen perfection in the world?!

As far as one can tell, the day we will have a single fast charger for all our stuff is not far off. For now, we simply need to be a bit attentive in regards to what standard our devices use. However, as an early prototype for the universal standard, you can charge most of your things with a USB PD or QC.